Clifford Kokopenace, a member of the Grassy Narrows First Nation, was convicted of manslaughter on June 17, 2008, after a jury trial held in Kenora, Ontario. Prior to sentencing, Mr. Kokopenace’s trial lawyer learned that First Nation residents were overwhelmingly underrepresented on the Kenora jury roll.  This information came to light in an affidavit filed by Falconers LLP on behalf of Nishnawbe Aski Nation (NAN) at the Inquest into the Death of Reggie Bushie. The affidavit, sworn by the Acting Supervisor of Court Operations for Kenora District, Ms. Rolanda Peacock, explained that it was not actually possible for the residents of many First Nations in the Kenora District to be on jury roll because Court Services officials did not have accurate lists of First Nation residents, and, in fact, had not even been aware of which First Nations were in the Kenora District.

When the issue of jury representativeness was raised by Mr. Kokopenace’s trial counsel, the trial judge ruled that he was functus officio.  The judge held that he no longer had jurisdiction to consider the issue, as a verdict had already been rendered.  The representativeness of the jury was therefore considered for the first time on appeal to the Court of Appeal for Ontario.  The Court heard fresh evidence with respect to the representation of First Nation residents on the Kenora jury roll and ultimately ordered a new trial.  A majority of the Court held that the process used to prepare the jury roll had violated Mr. Kokopenace’s rights under sections 11(d) and 11(f) of the Canadian Charter of Rights and Freedoms.  NAN, represented by Julian Falconer, Marc Gibson, and Julian Roy of Falconers LLP, participated in the hearing as a friend of the court and played a significant role in compiling the record for the appeal.

The Attorney General of Ontario appealed the Court of Appeal decision to the Supreme Court of Canada. Ontario argued that there is no constitutional requirement for any First Nation residents to be represented on provincial jury rolls.  NAN again intervened on the appeal, represented by Julian Falconer, Julian Roy, and Marc Gibson. 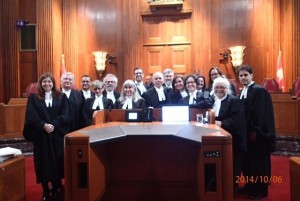 Julian Falconer, Julian Roy, and Marc Gibson at the Supreme Court of Canada during the Kokopenace case

NAN argued that Ontario is obligated to employ a mechanically sound process to ensure the representation of First Nation residents on the jury roll.  NAN further asserted that participation in the justice system is a treaty right that engages the Honour of the Crown.  The matter was heard in the Supreme Court of Canada on October 6, 2014, and the ruling was issued on May 21, 2015.  Justice Moldaver, writing for the majority, allowed the Appeal, stating that the order for a new trial is set aside and Mr. Kokopenace’s manslaughter conviction is reinstated.  Further, the Court determined that the state met its representativeness obligation with regard to jury selection, and that a fair opportunity was provided for a broad cross-section of society to participate in the jury process. In dissent, Chief Justice McLachlin and Justice Cromwell stated that the jury roll was not representative due to its composition being a “substantial departure from what random selection among all potentially eligible jurors in the district would produce, in view of the under-representation of Aboriginal on-reserve residents on the jury roll.”

Factum of the Intervener, Aboriginal Legal Services of Toronto

Factum of the Intervener, The Advocates’ Society

Factum of the Respondent, Her Majesty the Queen

Factum of the Bushie and Pierre Families

Factum of the David Asper Centre for Constitutional Rights