Falconers LLP lawyer, Julian Falconer, who represents the DeBungee family, Nishnawbe Aski Nation and Chief James Leonard of Rainy River First Nations, has often taken his Cessna airplane into the sky above the city to trace the rivers that have recently attracted national attention, and acted as counsel during the coroner’s inquest into the deaths of seven Indigenous youth who died in Thunder Bay between 2000 and 2011.

In flight, Falconer comes in from the east along the coast and up the McIntyre River where Christina Gliddy once lay, and maybe a stone’s throw away, Kyle Morriseau, 17, who was pulled from the river on November 10, 2009. On October 19, 2015, Stacy DeBungee, 41, was pulled from the same river almost in the same location where Morriseau was found earlier, and only a short distance up the river is the spot where Curran Strang, 18, was found on September 26, 2005. Falconer then banks south and west to where the three fingered Kaministiquia River flows into Lake Superior. Jethro Anderson, 15, was pulled from these waters before the first split in the river on November 11, 2000. Further up river, Jordan Wabasse, 15, was found on May 10, 2011, just downstream from the James Street Bridge, three different people told Thunder Bay police and the OPP that a local young man claimed to have pushed Wabasse into the river. “I’ve flown over the rivers a couple of times,” said Falconer. “It is a very sad experience. From up here, it brings up the fragility of life.”

NAN’s Grand Chief Alvin Fiddler stated, “We have lost too many of our youth here in the city. There are things we are looking at now. Most of the youth have gone back home, but they will be back,” said Fiddler. “(Parents) shouldn’t be forced to send their kids to Thunder Bay if they have concerns.” Fiddler said NAN is inviting federal, provincial and municipal officials to an emergency conference on July 5 and 6 to send students to new high schools in municipalities outside of Thunder Bay by September. “That is how urgent it is,” said Fiddler 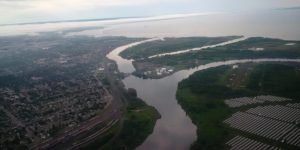 The Kaministiquia River in Thunder Bay. “It is a very sad experience. From up here, it brings up the fragility of life.” Falconers LLP Lawyer and pilot Julian Falconer