Thursday November 3, 2016: The inquest jury into the death of Lena Anderson heard evidence from the NAPS Chief of Police, Terry Armstrong, and Board Chair, Mike Metatawabin about NAPS’ desire to be recognized as a police force under the Ontario Police Services Act. Lawyers Julian Falconer and Asha James serve as counsel to the NAPS Chief of Police and the NAPS Board

Chief Armstrong and Chair Metatawabin testified about the desire for NAPS to be able to provide the same level of policing service to First Nation communities as is enjoyed by Non First Nation communities in Ontario. NAPS hopes that legislation will be tabled by the provincial government which would allow NAPS to be governed by the Police Services Act, just as other police forces in the province. Click here to read more. 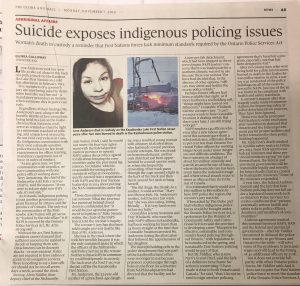