Today, Julian Falconer is appearing as a panelist at the virtual conference of the Canadian Association For Civilian Oversight of Law Enforcement (CACOLE).

Julian will be speaking about the role of civilian oversight bodies, including his extensive experience seeking accountability for the victims of police misconduct, including communities of colour and Indigenous persons.

Julian will also be speaking about the important role of First Nations policing today, including the work of the Nishnawbe-Aski Police Service (NAPS), the largest Indigenous police service operating in Canada today. Though First Nations police services have historically faced challenges with underfunding and exclusion from legislated standards for adequate and effective policing, recent developments point to a new way forward.  To that end, Julian will be speaking about the recent passing of Ontario’s Community Safety and Policing Act, which has created a legislative framework for policing – including oversight from the existing oversight bodies such as the SIU and OIPRD.

The challenges of culturally responsive policing and culturally competent oversight form an important part of keeping communities safe. Falconers LLP is proud to represent First Nations as they establish their own models of peacekeeping and peacemaking. 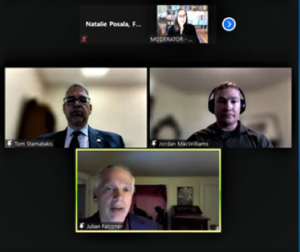