On November 28, 2017, Julian Falconer was a featured panelist on TVO’s The Agenda, with Steve Paikin. In an episode entitled, “Lawyers and Compelling Diversity”, Falconer discussed with other panelists the Law Society of Ontario’s adoption of the Statement of Principles, an initiative that has been part of a long-term and ongoing effort by the Law Society to increase diversity, equity and inclusion in the profession. To watch this panel click here.

Falconer stated, “this is only the beginning in terms of proactive steps, now I want to be clear about that, and it is one of the reasons it’s so important that this discussion happen now, so it does not happen as we inch along…like any other rule of the Law Society, ultimately, there has to be a compliance plan and there is… for the first two years the emphasis with be on education, it will be on education and it will be on caution, in respect of those who are unable to comply or are not complying.”

On November 6, 2017, The Law Society of Ontario released an updated Statement of Principles, which, according to the Law Society, can be used to provide licensees with a guide as to what might be included in a personal statement of principles.

The newly presented template Statements of Principle express a commitment to the following:

In December 2016, Julian Falconer, as a Bencher and Vice-Chair of The Challenges Faced by Racialized Licensees Working Group, presented a motion that Convocation approve the thirteen recommendations outlined in the “Working Together for Change: Strategies to Address Issues of Systemic Racism in the Legal Professions report.”. The motion has been approved and adopted by the Law Society. 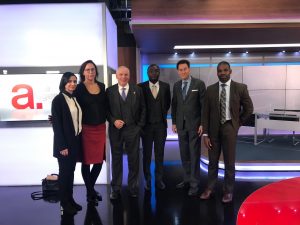 The panelists with host Steve Paikin on TVO’s the Agenda