September 15, 2016: The sub-Executive of the Toronto Conference of the United Church of Canada (“UCC”) held a meeting today to hear responses to the interview committee’s report, which found that Reverend Gretta Vosper is not suitable to continue as a minister in the United Church because of her theological beliefs.

In her response to the Committee’s report, Rev. Vosper emphasized the need for a discussion amongst the wider church, instead of continuing an adversarial process by proceeding to a formal hearing. Rev. Vosper urged the sub-Executive of the Toronto Conference to choose dialogue over discipline.

The sub-Executive of the Toronto Conference also received responses to the Committee’s report from members of Rev. Vosper’s congregation at West Hill United Church (“West Hill”) and representatives from the Toronto Southeast Presbytery.

The Committee interviewed Rev. Vosper on June 29, 2016 and delivered its report on September 8, 2016. The majority of the committee recommended that Rev. Vosper undergo a formal hearing to decide whether her name will go on a list of ‘discontinued’ ministers. In a detailed dissenting report, four members of the Committee emphasized that: Rev. Vosper’s theological work, in particular her book “With or without God, is “on the syllabus of theological schools”; that Rev. Vosper’s belief in a non-theist God are shared by “many ministers”; and that Rev. Vosper’s “theological positions, while not in the mainstream, are not unique amongst the ministers and lay persons of the United Church.”

Rev. Vosper is the Minister of West Hill United Church, located in Scarborough and within the Toronto Conference of the United Church of Canada. Rev. Vosper is a self-described atheist who does not believe in a theistic god. Rev. Vosper has openly applied her views throughout her ministry since 2001 and has the full support of her congregation. 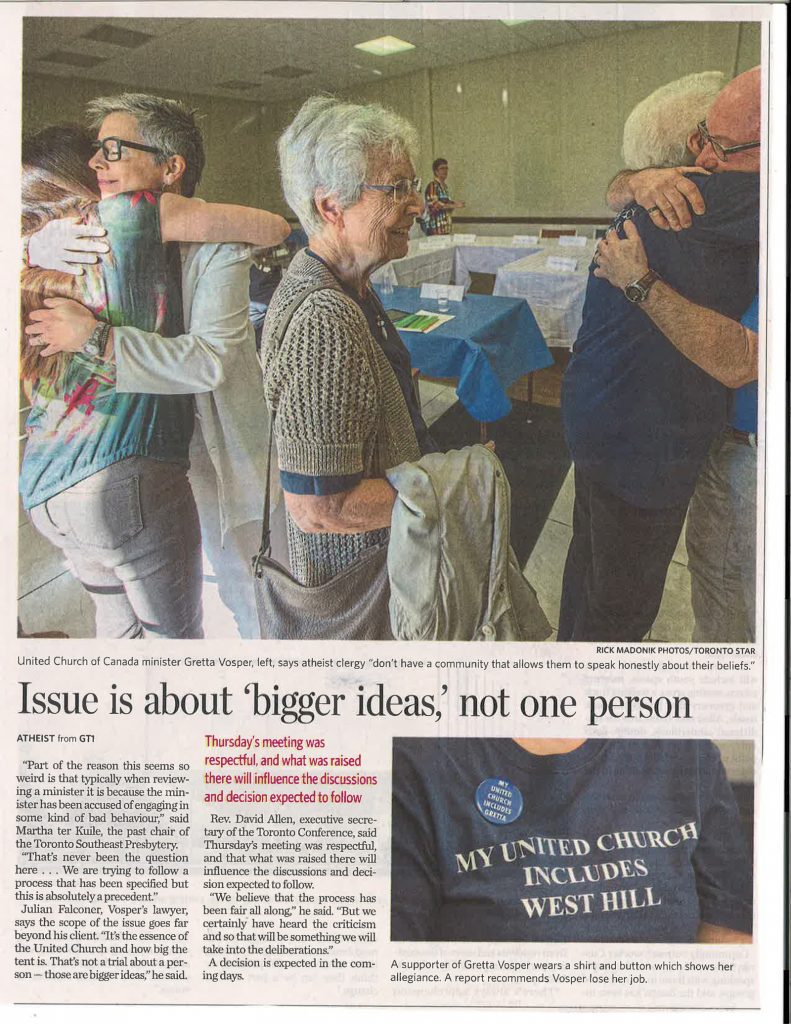