May 4, 2018: Jailed Toronto police officer, James Forcillo, was remanded in custody Friday, May 4, 2018, to May 31, 2018 to face charges of perjury, obstruct justice and breaching his bail conditions, as reported by the Toronto Star.

April 30, 2018: In a unanimous decision, Chief Justice of Ontario George Strathy, Justice David Doherty and Justice Gary Trotter dismissed Constable James Forcillo’s appeal of both his conviction in the 2013 shooting death of 18-year-old Sammy Yatim, and the six-year jail sentence handed down by trial judge Justice Edward Then.

On January 29, 2016, a jury delivered a guilty verdict in the trial of James Forcillo in the death of Sammy Yatim.  Forcillo was found guilty of attempted murder, and not guilty of  second degree murder or manslaughter.  Sammy was shot nine times by Constable Forcillo on July 27, 2013, while confined within a TTC streetcar and surrounded by numerous Toronto police officers.  The jury rejected Constable Forcillo’s testimony that Sammy presented a real threat to the officer at the time that he discharged his weapon a further six times while Sammy lay mortally wounded on the floor of the streetcar.  The jury was not satisfied beyond a reasonable doubt that Constable Forcillo was guilty of murder.

Falconers LLP represents the mother of Sammy Yatim, Sahar Bahadi, in a civil law suit, against Constable Forcillo and the Toronto Police Service. The action was issued on October 11, 2013.

As mentioned in a Toronto star article, “(Forcillo) knew from his training that Mr. Yatim did not pose an imminent threat to anyone merely by re-arming himself with a knife. He knew that he was not entitled to kill Mr. Yatim in these circumstances, yet he proceeded to fire six additional rounds fixed with that lethal intent,” the decision states.  Late last year Forcillo was charged with breaching his bail conditions. He was taken into custody after being found at his new fiancée’s apartment, when he should have been at home. His bail was revoked and he has since been charged with perjury and attempting to obstruct justice. He is currently suspended without pay from the Toronto police. 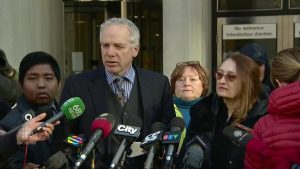 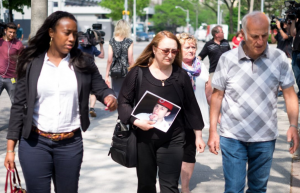 Toronto cop who shot Sammy Yatim to be held in jail on perjury, obstruction charges    Toronto Star, May 4, 2018

‘It was the right thing to do,’ says man who put Sammy Yatim shooting video on YouTube   Toronto Daily Mail, January 29, 2016

Prosecution’s strategy to get conviction worked   The Globe and Mail, January 25, 2016

Click here to read more about the civil lawsuit.