Today,  NAN Grand Chief Alvin Fiddler, Board Chair Mike Metatawabin, and NAPS Chief of Police Terry Armstrong, announced to the Chiefs in Assembly “A New Tripartie Agreement: A New NAPS.” Falconers LLP has been the legal / negotiation support in respect of the Tripartite negotiations with Canada and Ontario since 2013.
The key points presented to the Chiefs is that finally the Safer Ontario Act has been proclaimed and the Indigenous opt-in mechanism will come into force January 2019. Also, going forward it was negotiated that there will be deficit-free policing, as past cumulative deficit will be retired and forecasted shortfalls addressed. Additionally, it was negotiated that by 2022-2023, every officer will have a radio and a partner.  Grand Chief Alvin Fiddler also provided comments. He provided words of hope that the “New NAPS” can move forward in a good way. He said: “This is a significant day for our communities and our officers”. The presentation closed with an honour song directed to all those who took part in negotiating the agreement. 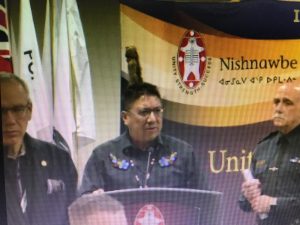