Today, after hearing more than 7 months of testimony from approximately 150 witnesses, the jury delivered its verdict and 145 recommendations at the Inquest into the deaths of seven First Nations youth who died while attending school in Thunder Bay.  The Jury’s verdict that four of the seven deaths were  undetermined is significant.  Lawyer Julian Falconer told reporters that, “‘Undetermined’ in respect of three of five of the drowning deaths sends a clear message that the police investigations were deeply flawed…  Consequently, tragically, there is no way to rule out that these kids were deliberately killed.” 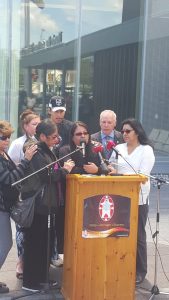