The National Assembly of Remote Communities (“NARC”) has welcomed Knowledge-keepers, youth, and leadership from remote First Nation communities across Canada, as well as government officials to gather in Treaty 6 territory to host a symposium and formally launch its inaugural Assembly. The NARC Symposium began today and will continue through Thursday June 2nd.

1) The Journeys of Remote Communities: Examining the realities and lived experiences of those who grew up or were raised in a remote community;
2) Community Vulnerabilities Respecting Settlement Payouts: Welcoming speakers and discussing compensation safeguards, best practices, and lessons learned from previous settlement/compensation payouts; and
3) The Science of Measuring Remoteness: Hearing from the experts on efforts to measure and account for the costs of remoteness (“We cannot manage what we do not measure”).

Stemming from the Global Resolution Discussions that began Fall 2021 in relation to the Canadian Human Rights Tribunal (CHRT) proceedings for the Caring Society case, the National Assembly of Remote Communities represents a united voice on remoteness issues, including the increased costs of delivering social services. The NARC’s work will build on the work of the NAN-Canada Remoteness Quotient (RQ) Table established in 2017. Canada will fund a NARC-Canada Remoteness Table to develop a First Nations-sighted, evidence-based statistical model to estimate the increased costs of delivering social services in remote communities across the country. Canada will also establish and fund a dedicated Remoteness Secretariat whose primary responsibility will be supporting First Nations in addressing remoteness issues.

This assembly and symposium represents an exciting and long overdue moment in Canadian history to truly put remoteness front and center. The information and knowledge shared will serve as a foundation for future NARC-centered work and research, putting Canada on notice that just because remote communities so often go unseen, does not mean they will continue to go unheard.

Charter members of NARC include Nishnawbe Aski Nation, the Federation of Sovereign Indigenous Nations, Manitoba Keewatinowi Okimakanak, and the Alberta and Northwest Territories regions of the Assembly of First Nations. The Assembly is being held at TCU Place Conference Centre, 35-22nd Street East, Saskatoon, SK.

For Media Coverage see below: 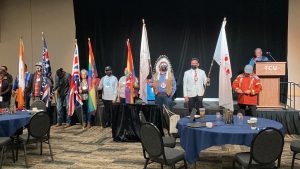